We had hoped to announce our new pregnancy with something cute and clever. But with everything that has gone on these last few days, however, we have decided a simple approach is best.

We are expecting a new baby in May–Mother’s Day, in fact–and hoped that for once we would have an easy pregnancy. We did not change our plans for our overseas trip, especially since the pregnancy was going very smoothly and Deanna was scarcely sick and only slightly more tired. She is currently about 2 1/2 months along.

The trip went well until our trans-Atlantic flight home. About two hours into the flight, Deanna began bleeding very badly. She panicked initially, but quickly calmed down as the flight attendants cleared a row so she could lie down. There were, however, still 10 hours left in the flight, and we were directly over the ocean. It was a long, sad, difficult flight.

Since the flight was Friday afternoon, we decided to wait to see our doctor rather than go to a hospital. Deanna knows a fair amount about miscarriage, and we knew there was nothing that could be done anyway. It was in God’s hands. Since the bleeding stopped completely, we still had some hope, but the amount of fluids lost were not a good sign. We had a sonogram Monday afternoon, but it was inconclusive. The baby was there, but they were not sure if they could see the heartbeat or not in the fuzziness of the picture. In contrast, Emily’s body was clearly visible, as well as her heartbeat, at 6 1/2 weeks, about three weeks earlier than we are in this pregnancy.

We are trying to get in with a specialist, but otherwise will go for another sonogram on Thursday morning. Hopefully we will get an answer as to whether the baby has survived or not. As you can imagine, it is very difficult to wait and not know. Deanna is staying in bed right now, mostly because it is impossible to do anything or think about anything else.

Here is the sonogram they took. We asked for a copy, in case it was the only one we ever got before confirming we lost the baby. Thank you for thinking of us. These are difficult days. 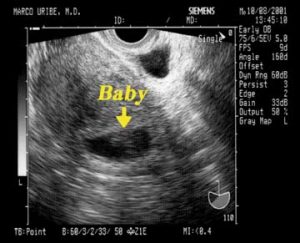 To hear a song that has held a lot of meaning for us during this difficult time, visit http://www.godknewyourname.com

Baby #1 is doing fine. After our long ordeal and terrible scare, we finally saw the heartbeat on Wednesday, Oct. 10. Along with this baby and his sac, however, there was also a second collapsing empty sac. This pregnancy apparently began as twins, but baby # 2 either never grew or died a few weeks after conception.

Here is the new sonogram. Baby has grown a lot in two days, and now has arm buds! We appreciate all the prayers of everyone, and we think things will go better now.

When I was up early in the morning one of the days since all this began, I stood in front of the sonograms of our two babies: Casey, who we lost three years ago, and Emily, who is the joy of our lives. I wondered that night which of our babies was going to get a little brother or sister–the one in heaven or the one here with us. We now see that each of them will have a sibling with them. This is something we just can’t be too sad about.

It’s going to be a girl! Elizabeth Grace may arrive a bit early and by c-section again, as Emily did, but she is doing just fine. Our pregnancy has been labeled high risk again, and we will begin seeing the specialist in early January. We aren’t so worried this time, though. We got through it once before, and we can do it again. Here is a sonogram from our December visit.

Emily is already excited about “Elisbetz” coming and likes to feel her kick! We anticipate her arrival at the end of April or hopefully the first week of May, should they still require a c-section. (We’re hoping for a regular delivery, even though the odds are against it.) Check back to see how Elizabeth is doing!

Here’s our Christmas card from this year, featuring both girls!

Things are going very well. We saw the perinatologist and he released us back to my regular ob/gyn and removed the “high risk” label. My uterus is not in great shape, and he is against labor, but we’ll revisit the issue with my regular doctor when it gets closer. I truly do not want another c-section if I can help it. My last one was so terrible.

Elizabeth is growing fine and is right on target, and maybe even a touch bigger, than expected. I am approaching the six-month mark and finally managed to gain a few pounds. We’re not worried anymore, and are trying to enjoy the pregnancy.

We are nearing the end and it is decision time. Yesterday, at my 36-week checkup, Elizabeth was head down, so another c-section is not absolutely called for. We weren’t sure what we wanted to do, repeat c-section or VBAC (vaginal birth after Cesearean), so we didn’t schedule anything. I’ve been researching the issue as best I can. Only about 18% of women eligible for VBAC attempt it. And only 60% of those who attempt it are successful. I’m assuming those 18% are the very best candidates–very motivated to try labor and had a factor in their first c-section that probably would not repeat. If only a little over half of them are successful, I don’t know how good my chances would be. I don’t consider myself a prime candidate with my bicornuate uterus. If my c-section experience had not been so poor last time, I wouldn’t question this, but I don’t know that I want to do it again.

Of course there are many VBAC horror stories out there–uterine abruptions, baby brain damage, even deaths of mother and baby. Hysterectomy is a potential end result as well. The abruption rate seems to be about 1%, which is a little high, I think. That rate triples if you attempt an induction on a VBAC.

Our best thought right now is to just see what happens on next Tuesday. If I am still completely undialated and uneffaced, then we will probably schedule the section. If I seem to be progressing, then I just might see what happens. Elizabeth weighs exactly what Emily did at this point, right at 6 pounds. So she is not overly large. I’m doing better at this point in the pregnancy than I did with Emily. My ankles look horrible, but otherwise I am still pretty much up and spry. Wish us luck with our decision!

After making the agonizing decision to have a scheduled c-section, we learned it was our only option after all, as Elizabeth was transverse (sideways) and could not be delivered vaginally. She arrived on Wednesday, May 1, 2002. 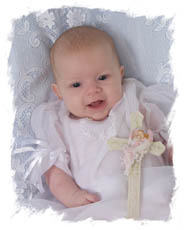 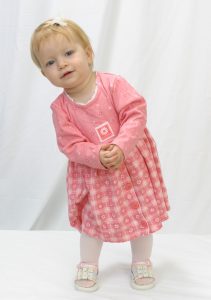 In 2008, when Elizabeth was 6 years old, she had her first seizure. Shortly after, she was diagnosed with epilepsy due to heterotopic grey matter, where her brain did not develop correctly while she was a fetus.

While the cause of it is not definitive, certainly the disruption of the pregnancy when her twin miscarried was at a critical time in brain development. It is possible that this caused the problem.

On the bad days, when she’s had a long seizure and is fighting the headache after, sent home from school and having collapsed in front of her friends, it’s Elizabeth who reminds me that she is the lucky one. “I’m here,” she’ll tell me. “My twin sister is not.”

May we all live up to our names as well as my Elizabeth Grace.

Here is a video we did that is used to help other kids who have to have EEGs for epilepsy. It is used all over the world.

You can stay updated on her at my personal blog.

One thought on “Waiting for Elizabeth”